When a good sized industrial unit became available in Golborne (a small town between Wigan and Warrington), Tree Tops owner Joanne Fairclough was keen to start the process of setting up her indoor play business.

With an ideal location and great transport links via the M6 and A580 (East Lancs), Joanne came to Soft Brick to make her play area dreams a reality!

The 5,500 sqft building is an average sized industrial unit which required a Class E (used to be D2) ‘change of use’ planning application. The average size of an indoor play building in the UK is approximately 6,000-7,000 sqft. The building was in excellent condition and was fully fitted out with a kitchen, toilets and a small mezzanine level – ideal for a set of party rooms! The height at the apex of the roof cleared 6.5m – so ideal for a 3-tier soft play structure.

After speaking to our sales team on the phone, Joanne was keen to come and see the team at Soft Brick in person. We set up a meeting so Joanne could meet with her account manager and chat through her design ideas with a face to face meeting with her designer. We also threw in a tour of the factory – it’s where the magic happens and it’s great for our customers to see the product going through and the different processes involved! After visiting the team at LIW and visiting one of Soft Brick’s builds – Jollies Play Barn – we’re happy to say Joanne picked Soft Brick as her supplier. Joanne had been busy and had already drawn up quite an extensive brief for her play area, including a good idea for theming!

Once we’d had confirmation from Joanne that the pre-planning application was very positive and that the Class E (used to be D2) planning application had been submitted, we got to work on the design. After a few tweaks to the Building Layout exploring various options – which included a guide capacity and budget – Joanne was happy for us to proceed to a full 3D design and quotation.

“After speaking to Soft Brick’s sales team I was impressed with how helpful they were – even at an early stage when I hadn’t secured the building or explored planning etc. I did have some issues actually getting the planning application granted, but the support from Soft Brick was great!”

Whilst we were busy working on the design, Joanne unfortunately had some bad news – despite the very positive feedback regarding pre-planning, the actual planning application was declined due to the building being in a ‘primary employment zone’. With the support of Soft Brick and two local councillors, Joanne appealed the decision only to have it rejected for a second time! Despite this setback, undeterred and armed with even more local support, Joanne again appealed the decision and thankfully, the Class E (used to be D2) application was eventually granted!

A key part of Joanne’s brief was to make sure her youngest customers were well catered for! With this in mind we have a dedicated toddler / baby area away from the main structure and older children. Fortunately, the space within the building allowed us to design a large toddler structure with twin-lane toddler slide, hidey hole, and dedicated 2.4m toddler ball pool – with ball pool sprinkler system! To the front of this area, Joanne was keen to include a large open soft play area with adult seating to the surrounding edge to encourage adult supervision.

Prior to manufacturing any products in our factory, our engineering and design department carried out an accurate site survey and produced a colour checklist. Part of Joanne’s idea with her play area business was to ‘bring the outdoors indoors’ – so she was keen for us to explore a theme based on woodland / trees (hence the name Treetops!). Joanne had even developed some woodland characters she wanted us to incorporate within the design. Since Soft Brick have the best team of artists in the industry meant this was no problem at all!

“I saw the great product and theming at Jollies Play Barn and I loved it. Although I did initially speak to other suppliers as well, I knew very quickly Soft Brick understood what it was I was looking for, and importantly that they could deliver. The fact the UK’s leading (indoor play) manufacturer is pretty much on my doorstep couldn’t be ignored either!”

The main soft play structure was to continue with the outdoor theme – plenty of jumping, climbing and swinging was the vision – and Soft Brick sure did deliver! We jam-packed the 3-tier structure with an assortment of challenging climbs, rope bridges, suspended rope activities, walk-of-fear features and topping it all off with a 4m wavy open slide!

There is no denying that the outdoor / woodland theme Joanne chose is one of the most popular, but Soft Brick is especially proud of the fact that each and every one of their installations is unique and totally bespoke.
Here are some examples of how we achieved this for Joanne and Tree Tops:

Soft Brick’s in house manufacturing and installation teams managed to complete the Tree Tops build on schedule! From a design point of view, it was great to work with a customer who knew exactly what she wanted and wasn’t put off working with us on the finer details of the design.

As part of our ongoing service to all our customers, we don’t just walk away when the build is finished! As we were completing the build, it became obvious that the standard wall / ceiling lights were not going to be enough to fully illuminate the play system on their own. With this in mind, we quickly specified and manufactured some additional ‘under-deck’ lighting to cover the slightly darker areas and retro-fitted these within the play system.

Everyone at Soft Brick would like to wish Joanne and the staff at Tree Tops the very best of luck for the future! Be sure to check out the photos and call by to check it out for yourself! 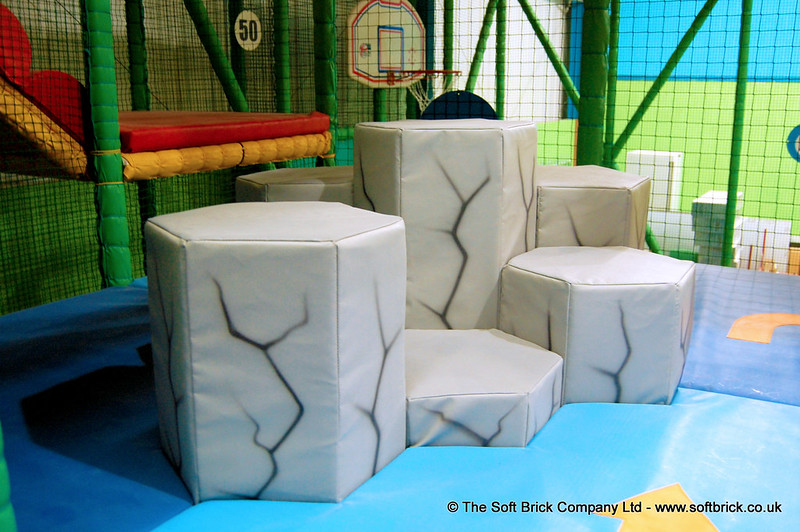 Visit Tree Tops on Facebook and www.treetopsplay.co.uk for more information!

“I love the design – it’s just what I was looking for when I set out to start my indoor play business. I’m really pleased how it’s all come together, from the play features in the design to the inclusion of my characters – it looks great! Thank you to all the team at Soft Brick!”