We're at the beginning of 2018 and we have lots of new and exciting Soft Brick builds to shout about, starting with one completed at the end of 2017; Millets Farm in Oxfordshire. The team at Millets Farm got in touch with Soft Brick in order to design a bespoke proposal for an indoor soft play area that was "something quite different to the run-of-the-mill soft play". This initial brief went out to various UK based soft play manufacturers and we're proud to say Soft Brick were the selected manufacturer to see the project through to completion.

So let's take a closer look at the project, start to finish...

As part of the tender like selection process, the design team at Soft Brick had produced an initial conceptual design based on a generic +10,000 sqft building. Upon being awarded the contract our team of designers got to work on the real thing - a purpose built building of a similar size, tall enough to incorporate a 4-tier soft play structure at around 8m in height. The new construction was to be a steel framed industrial style building requiring formal planning permission to achieve the Class E (used to be D2) status - the requirement for indoor play. Included in the space was a mezzanine level, which provided a raised area for a sports court and freed up ground floor space for additional seating. The underside of the mezzanine level featured a kitchen / servery area to ensure that we could maximise the space for play.

The existing facilities at Millets Farm include restaurant(s), cafe, falconry, large maize maze, farm shop, garden centre, trout lake, petting zoo, conference centre and woodland area (Phoebe Woods). With all those offerings already, it was decided that the play facility was to have it's own dedicated car park area, with a new road being added to facilitate easier access.

As part of the selection process for this project, our design team had put together a conceptual design that provided a great basis for the formation of the final brief. Millets were really pleased with the features and overall farm concept we had put together in the concept and wanted as much of these ideas pulled into the final scheme.

The team at Millets had mentioned a few key elements the final proposal was to include:

Having all these topics to draw inspiration from and an initial concept that was met with such high praise meant a great head start for our design team. So let's have a look at the final design in a bit more detail...

We met with the team at Millets at various points throughout the design process, to ensure they were kept in the loop on progress and provide them the opportunity to offer input on the design. We started to get some finished product going through the factory and the feedback from Millets was great - we were all confident that the look of the design was going to be in-keeping with the rest of the building project.

As mentioned earlier, a key part of the initial concept / brief was to tailor the design to the attractions on site at Millets; Millets Farm is famous for their maize maze, so the structure would also have it's own maize maze too! The similarities didn't end there either, here's a taster of some of the others: Some of the areas included in the design are: This key aspect of the play offering is one of the biggest standalone role play areas we have ever designed. All designed to look under one roof, it draws inspiration from many of the facilities at Millets - farm shops, cafes, stables (with custom horse rockers!) and more! Again, another key element of the design brief was a large area of toddler soft play that would cater for the younger age groups throughout the week. We populated this area with our industry leading range of soft play, all themed to suit the farm theme and compliment the main structure - featuring:

Here's a look at the finished article: 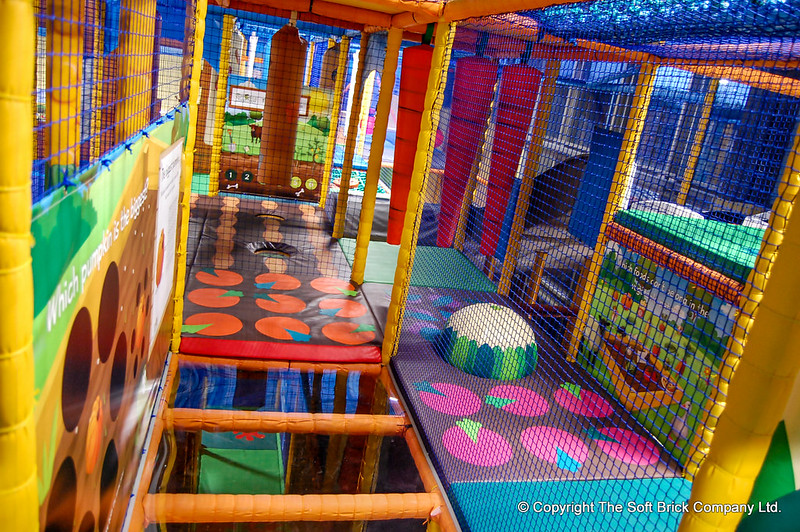 Everyone here at Soft Brick would like to wish the team at Millets / Sprouts Play Barn the very best of luck for the future! Be sure to check out the photos and stop by to check out the farm for yourself!

Update 2021!
Freetimewiththekids.com has done a great review of the Sprouts design, picking up on the details we have included throughout.

Be sure to check it out here: https://freetimewiththekids.com/2021/07/27/sprouts-playbarn-review/

For clarity, Soft Brick were not involved nor influenced this review!